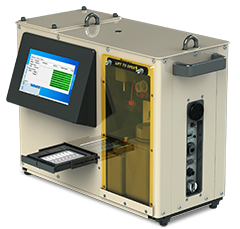 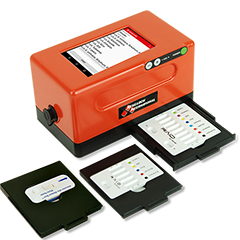 The ANCAM™ 6100 is a portable, machine-vision, multi-analyte lateral flow test reader and communication device. More accurate than conventional visual inspection of test strips, and eliminates errors caused by low light and other factors. This compact instrument may be used with a variety of single-target or multi-target lateral flow coupons. 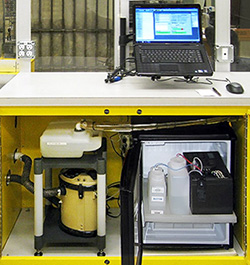 Research International's ASAP II is an integrated, automated, customizable CBRNe threat detection system for mailrooms. An ASAP II installation is typically enclosed in an negative-pressure room to contain any potential incoming threat, and a downdraft table to protect workers from exposure. Packages are x-rayed and tested for radiation; the bio-threat component detects and identifies from four to eight bio-agents in real time while mail is simultanously screened for chemicals, drugs, explosives. Control software monitors all subsystems and quickly notifies the operator of any threats detected.

Tac-7 is the next generation in biological aerosol detection. It measures the biofluorescence and diffractive scattering produced by aerosol particles as they pass through an intense ultraviolet beam and classifies them as being of either biological or non-biological origin. Developed by Research International for homeland security, public health and military applications.

TacBio was developed by the U.S. Government (Edgewood Chemical Biological Center) for military, homeland security, and public health applications. It is a compact and rugged portable biological particle detector that uses both diffractive scattering and natural biological fluorescence to monitor aerosol particulates and classify them as being of either biological or non-biological origin.

Research International Inc. is an official licensee of the U.S. Government for the TacBio, and is authorized to manufacture and sell the instrument worldwide. 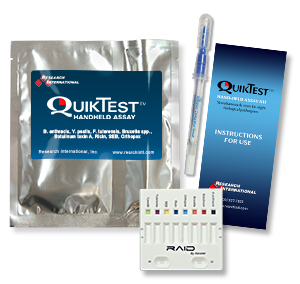 QuikChek aerosol simulants are used for “bump testing” equipment before use in the field. The nebulizer administers a small aerosol challenge to verify that the equipment is operational. Useful for chemical and biological collection, detection and identification equipment.