Since 1990 Research International, Inc. has developed prototypes and retail products for numerous companies and government agencies including:

Some of these include the products detailed below. 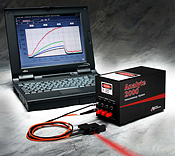 The Analyte 2000 is a 4-channel, single wavelength fluorometer optimized for performing evanescent-wave fluoroimmunoassays that was developed in conjunction with the Naval Research Laboratory for biomolecule detection. This low-power, microprocessor-controlled instrument provides parts-per-billion sensitivities to biochemical species, such as proteins, viruses, bacteria, and spores, by monitoring antibody/antigen reactions on tapered glass waveguides. The instrument is controlled from a remote computer leading to a system size of only 20 cm L  x 8.5 cm H x 11.2 cm W. The Analyte 2000, coupled with a separate fluidics box, has been flown and operated in small, unmanned air vehicles (UAVs) using a remote RF link to a ground-based portable computer.

Analyte Adapter
The Analyte Adapter is a small optoelectronics module that serves an an interface between the Analyte 2000 and the inexpensive, injection-molded polystyrene waveguides developed for use with the RAPTOR fluoroimmunoassay system.

Research International has developed a PC-based high-resolution, narrow waveband, spectral scanner, the Ferret II Plus, that is ideal for the interrogation of any single- or multi-mode fiber optic sensor with a reflectance spectrum containing one or more sharp lines. The Ferret works especially well with sensors based on fiber optic Bragg gratings. The card continuously scans the spectrum of a long-lived LED, used as the light source, and measures the wavelength of reflectance peaks found in the recovered signal. PC-resident software converts changes in the wavelength of these reflectance peaks into values of the measured parameter, based on a calibration curve, and displays the data in real time on the video display of the PC. The Ferret, using appropriate fiber sensors, has demonstrated the capability to monitor strain to levels below 1 microstrain, temperature to 0.05°C, and pressure to 0.025% of full scale.

The Flow Assay and Sensing System (FAST) is a second-generation instrument, developed under contract to the Naval Research Laboratory (NRL) as a rapid, portable system for performing flow immunoassays with detection limits to 1 part per billion. The FAST 6000 can be configured either as a single channel, single analyte instrument or as a six channel, six analyte instrument, capable of performing six simultaneous assays for six different analytes on the same sample. The system is completely self-contained, needing only a bottle of buffer and a waste bottle for field operation.

In operation, this small-molecule assay system uses a fluorophore-labeled analyte, bound to analyte-specific antibody that is immobilized on a permeable membrane. When a sample containing analyte passes through the membrane an exchange reaction occurs, displacing the labeled analyte which is measured downstream. A typical assay requires two minutes to run and up to fifty assays can be performed before the instrument must be recharged.

The ChemCard2000 is an integrated fiber optic measurement system consisting of an opto-electronics interface on an ISA bus card and a software package for data acquisition and display. Any sensing method that changes its spectral characteristics in response to an analyte at the operating wavelengths of the ChemCard may be used. Prototype sensors have been developed at Research International for a number of analytes including pH, hydrogen gas, humidity, aromatic hydrocarbons, and temperature. The miniature optical pH sensor, based on pH dyes similar to those used in litmus paper, is available for industrial and biomedical applications. It operates via an immobilized indicator that is contained within a stainless steel microprobe 3.81 cm long and .033 cm in diameter.

The Model 845 battery is a 4 volt rechargeable lithium-ion cell of novel design only 8 mm in diameter and 4.5 mm in height. The cell was developed under the auspices of the National Institute of Aging to enable a new generation of hearing aids that do not require regular battery replacement. The battery has a design life of about 1,500 charge-discharge cycles, equivalent to the average 4 year lifetime of a hearing aid. It has a capacity of 10 mAh and can be discharged at rates of up to 10 mA. The 10 mAh capacity is sufficient to power a hearing aid for one day. A hearing aid based on this battery offers the advantages of: cost savings – no replacement batteries to purchase; ease of use – no small batteries to handle; safety – no small batteries swallow or insert in the ear. Additionally, the cell may be pulse-discharged at rates of 100-200 mA which offers the opportunity for exciting pulse power applications.

This compact sensor was designed as a platform for detecting a variety of hazardous gases including hydrocarbons, carbon monixide, hydrogen sulfide and biological warfare agents. 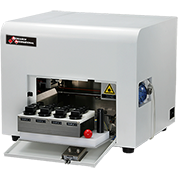 The PR610-2™ was a flexible, robotic, fluorometric assay system designed and built by Canon Chemical, Inc. under license from Research International. It was designed for the high-sensitivity monitoring of food-borne pathogens and their toxins. It represents a careful integration of optics, fluidics, robotics, and software into one compact system for use in laboratory settings. This unit automatically performed a user-defined, multi-step, fluoro-immunoassay protocol on 1 to 4 different samples by means of each of the system’s four disposable optical waveguide sensors.

Developed a versatile, miniaturized system for collecting and identifying chemical and biological warfare agents from a UAV platform for the Naval Research Laboratory.

The purpose of this project was to develop a versatile, miniaturized system for collecting and identifying explosive agents in an underwater environment. Funding was provided by NRL (Naval Research Laboratory) and resulted in the prototype pictured.